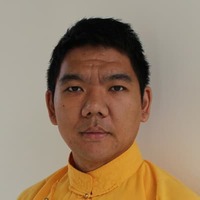 At the age of two, Tsenzhab Serkong Rinpoche II (1984 – present) pointed to the photo of the recently deceased Assistant Tutor of the 14th Dalai Lama and said, “That’s me!” Recognized as the reincarnation of the former Tsenzhab Serkong Rinpoche, the young tulku received his Buddhist training initially at Ganden Jangtse Monastery in South India. After deciding to continue his work for the Dharma as a layman, he completed his education at the Institute of Buddhist Dialectics in Dharamsala. On the advice of the Dalai Lama, he has now completed two years of intensive study of English in Canada and is continuing his higher Buddhist training.