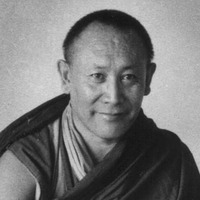 Geshe Ngawang Dhargyey (1925–1995) was noted primarily as a masterful Buddhist teacher. Educated at Sera Je Monastery, he trained nine incarnate lamas (tulkus) and thousands of Westerners. Appointed by the Dalai Lama as the first teacher for Westerners at the Library of Tibetan Works & Archives in Dharamsala, he taught there for 13 years. After an extensive international teaching tour, he founded the Dhargyey Buddhist Centre in Dunedin, New Zealand, and taught there for the rest of his life.