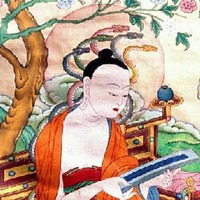 Nagarjuna was born into a brahmin family probably around the mid-first or early second century C.E. in South India in Vidarbha, a kingdom lying in present-day Maharashtra and Andhra Pradesh. He was predicted in various sutras, such as The Descent into Lanka Sutra (Lan-kar gshegs-pa’i mdo, Skt. Laṅkāvatāra Sūtra). At birth, a soothsayer predicted he would live only seven days, but if his parents made offerings to a hundred monks, he could live to be seven years old. Fearing for his life, at age seven, his parents sent Nagarjuna to Nalanda Monastic University in North India, where he met the Buddhist master Saraha. Saraha told him that if he became a renunciate and recited the Amitabha mantra, he would lead a long life. Nagarjuna did so and then joined the monastery, receiving the name “Shrimanta.”

At Nalanda, Nagarjuna studied sutra and tantra with Ratnamati – an emanation of Manjushri – and, with Saraha, especially The Guhyasamaja Tantra (dPal gsang-ba ’dus-pa’i rgyud). In addition, he learned alchemy from a brahmin, and gained the ability to transmute iron into gold. Using this ability, he was able to feed the Nalanda monks during famine. Eventually, Nagarjuna became the abbot of Nalanda. There, he expelled eight thousand monks who were not keeping the vinaya monastic rules of discipline properly. He also defeated five hundred non-Buddhists in debate.

Two youths, who were emanations of the sons of the naga king, came to Nalanda. They had about them the natural fragrance of sandalwood. Nagarjuna asked how this was so and they confessed to him who they were. Nagarjuna then asked for sandalwood scent for a statue of Tara and the nagas’ help in constructing temples. They returned to the naga realm and asked their father, who said he could help only if Nagarjuna came to their realm beneath the sea to teach them. Nagarjuna went, made many offerings, and taught the nagas.

Nagarjuna had known that the nagas had The Hundred Thousand Verse Prajnaparamita Sutra (Shes-rab-kyi pha-rol-tu phyin-pa stong-pa brgya-pa, Skt. Śatasāhasrikā-prajñāpāramitā Sūtra) and requested a copy. When Buddha had taught Prajnaparamita, far-reaching discriminating awareness (the perfection of wisdom), the nagas had taken one version of it back to their realm for safekeeping, the gods another, and the yaksha lords of wealth yet another. Nagarjuna brought back the hundred thousand verse version, although the nagas kept the last two chapters to ensure that he would return and teach them further. Later, the last two chapters were filled in with the last two chapters of The Eight Thousand Verse Prajnaparamita Sutra (Shes-rab-kyi pha-rol-tu phyin-pa brgyad stong-pa, Skt. Aṣṭasāhasrikā-prajñāpāramitā Sūtra). This is why the last two chapters of these two recensions are the same. Nagarjuna also brought back naga clay and built many temples and stupas with it.

Once, when Nagarjuna was teaching Prajnaparamita, six nagas came and formed an umbrella over his head to protect him from the sun. Because of this, the iconographic representation of Nagarjuna has the six nagas over his head. From this event, he got the name Naga. And from the fact that his skill in teaching Dharma went straight to the point, like the arrows of the famous archer Arjuna (the name of the hero in the Hindu classic, Bhagavad Gita), he got the name Arjuna. Thus, he became called “Nagarjuna.”

Nagarjuna later traveled to the Northern Island (Northern Continent) to teach. On the way, he met some children playing on the road. He prophesied that one of them, named Jetaka, would become a king. When Nagarjuna returned from the Northern Island, the boy had in fact grown up and become the king of a large kingdom in South India. Nagarjuna stayed with him for three years, teaching him, and then spent his last years elsewhere in his kingdom, at Shri Parvata, the holy mountain overlooking modern-day Nagarjunakonda. Nagarjuna wrote for the King A Precious Garland (Rin-chen ’phreng-ba, Skt. Ratnāvalī). This was the same king to whom Nagarjuna wrote A Letter to a Friend (bShes-pa’i spring-yig, Skt. Suhṛllekha), namely King Udayibhadra (bDe-spyod bzang-po).

Some Western scholars identify King Udayibhadra with King Gautamiputra Shatakarni (ruled 106–130 C.E.) of the Shatavahana Dynasty (230 B.C.E. – 199 C.E.) in present-day Andhra Pradesh. Some identify him with the next king, Vashishtiputra Pulumayi (130–158 C.E.). It is difficult to identify him exactly. The Shatavahanas were patrons of the stupa in Amaravati, where Buddha had first taught The Kalachakra Tantra and which was close to Shri Parvata.

King Udayibhadra had a son, Kumara Shaktiman, who wanted to become king. His mother told him that he could never become king until Nagarjuna died, since Nagarjuna and the King have the same lifespan. His mother said to ask Nagarjuna for his head and since Nagarjuna was so compassionate, he would undoubtedly agree to give it to him. Nagarjuna did in fact agree, but Kumara could not cut his head off with a sword. Nagarjuna said in a previous life, he had killed an ant while cutting grass. As a karmic result, his head could only be cut off with a blade of kusha grass. Kumara did this and Nagarjuna died. The blood from the severed head turned into milk and the head said, “Now I will go to Sukhavati Pure Land, but I will enter this body again.” Kumara took the head far away from the body, but it is said that the head and the body are coming closer together each year. When they join, Nagarjuna will return and teach again. All in all, Nagarjuna lived six hundred years.

The Six Collected Works on Reasoning (Rigs-tshogs drug) are:

As an autocommentary to the first of these, Nagarjuna wrote:

Included among his Collected Works of Praise are:

Included among Nagarjuna’s Collected Works of Didactic Explanations are:

Also attributed to Nagarjuna are several commentaries to The Guhyasamaja Tantra, including: