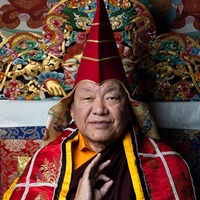 In 1958, amongst the rapidly increasing resistance against the Chinese invasion, the young Beru Khyentse decided to go on pilgrimage to Tsurphu (mTshur-phu), obtaining permission from the local Chinese leaders to do so. In reality, this pilgrimage was an attempt to be closer to the border with Nepal, in case a quick escape was required. Indeed, the following year, it became necessary to escape into exile, and Beru Khyentse led his followers to Mustang in Nepal. In 1961, they moved to India to a town called Rewalsar, which is a holy place of Padmasambhava, staying for four years. During this time, Beru Khyentse received teachings from masters such as the 16th Karmapa, the Sakya Trizin, and Kalu Rinpoche (Kar-lu Rin-po-che). In particular, he received teachings on the Kalachakra tantra many times from various teachers.

In 1965, Beru Khyentse and his followers were given permission by the Indian government to settle permanently in Mainpat, a hill station in what was then the state of Madhya Pradesh. A few years later, he entered a four-year retreat, which he completed successfully in 1972 at the age of 26. Following this, Beru Khyentse continued to receive teachings from numerous highly esteemed masters and gave teachings himself. Starting in 1979, he started travelling widely to give teachings, visiting the United States and Canada, much of Europe, and the Middle East. In Australia, Beru Khyentse founded his own center, Tashi Choling. He continues to travel and spread the Dharma across the globe.