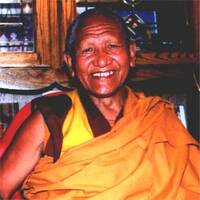 Khenzur Rinpoche Geshe Dawa (mKhan-zur Rin-po-che dGe-bshes zla-ba) was born in 1931 in the Kongpo (Kong-po) region of central-eastern Tibet and enjoyed an ordinary upbringing, attending school until the age of fifteen. In 1946, he enrolled at Ganden Monastery’s (dGa’-ldan dGon) Kongpo House (Kong-po Khang-tshan), which took in students from the Kongpo region, and received novice ordination from Sonam Namkha Rinpoche (bSod-nams Nam-mkha’ Rin-po-che), who was at that time the abbot of Ganden Jangtse College (dGa’-ldan Byang-rtse).

Over the next few years, he studied ritual prayers and texts, metaphysics, and debate, with various highly qualified teachers. At the age of 25, he received full ordination from Yongdzin Ling Rinpoche (Yongs-‘dzin gLing Rin-po-che), the Senior Tutor of His Holiness the 14th Dalai Lama. He was forced to cut short his studies in order to escape to India after the Chinese invasion of Tibet in 1959 but was able to continue his education once Ganden Monastery had been re-established in South India. In 1979, he earned his geshe degree, obtaining the lharampa (Lha-rams-pa) level – the highest possible level.

The following year, in 1980, His Holiness the Dalai Lama appointed him to a position at Namgyal Monastery (rNam-rgyal dGon-pa) in Dharamsala, where he stayed and taught for seven years. Following this, he was appointed to teach foreign students at the Library of Tibetan Works and Archives, where for over eighteen years he taught thousands of students and composed widely on Buddhist philosophy. In 2004, His Holiness the Dalai Lama bestowed upon him with the rare honor of being the abbot of Namgyal Monastery, a position he held until his retirement in 2009.