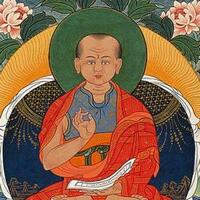 Langri Tangpa founded Langtang Monastery (gLang-thang dGon) in his birthplace and was renowned for purely keeping all of his vows and precepts. Over time, it is said that he had over 2,000 disciples, including such illustrious figures as Geshe Chekawa (dGe-bshes ’Chad-kha-ba Ye-shes rdo-rje), the author of Seven Point Mind Training (Blo-sbyong don-bdun-ma) and Khyungpo Neljor (Khyung-po rNal-’byor), founder of the Shangpa Kagyu school.

Geshe Langri Tangpa is best known for his Eight Verses of Mind Training (Blo-sbyong tshigs brgyad-ma), a pithy instructional text on developing the dedicated heart of bodhichitta. These eight verses became widely known and cherished throughout the Tibetan Buddhism world.

Geshe Langri Tangpa is sometimes called the “Sour-Faced Langri Tangpa,” because he rarely laughed or smiled, but spent a lot of time crying, as he was always thinking of the suffering and problems of the lower realms. One time, a disciple asked him not to be so sad, and Geshe Langri Tangpa replied, “Thinking of all the sufferings of samsara and how there is not an iota of happiness in the three realms, how could I possibly smile?”

It is said that he only laughed three times during his life. One time was when three mice managed to carry away a precious piece of turquoise from a mandala offering set by placing it on the belly of one of them and the other two dragging him by the feet. Another time was when he heard of a man due to be executed spending the last night of his life mending his shoes. The third time was upon seeing someone trying to pull out an enormous and heavy rock embedded deep in the earth, which turned out to be the head of a sleeping ogre. He passed away in 1123 at the age of 69.