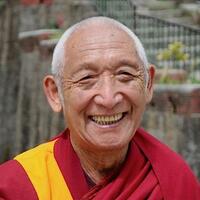 Geshe Sonam Rinchen (dGe-bshes bSod-nams rin-chen) was born in 1933, in Dargye (Dar-rgyas), located in the eastern Tibetan region of Kham. In 1945, as a young teenager, he decided to join the monkhood and entered Dargye Monastery (Dar-rgyas dGon), where he turned out to be an excellent student and debater. At the age of nineteen, Sonam Rinchen travelled to central Tibet on foot – a journey that took two and a half months – in order to study at Sera Monastery (Se-ra dGon-pa). At Sera, Sonam Rinchen took full ordination and carried on studying until the Chinese invasion of Tibet in 1959 forced him to leave Tibet and seek refuge in India.

Upon arrival in India, Sonam Rinchen, along with 1500 other monks and nuns, were placed in what had been a British internment camp in Buxa Duar, West Bengal. The weather was unbearably hot and humid for these Tibetans, who were used to the cooler and drier conditions of the Tibetan plateau. At Buxa Duar, the conditions were so harsh that many of the monks and nuns died. But Sonam Rinchen persevered and continued studying, and in 1967 he enrolled at what is now known as the Central University of Tibetan Studies in Sarnath, gaining both Shastri and Acharya degrees by 1976. A few years later, he obtained at Sera the Geshe Lharampa (dGe-bshes Lha-rams-pa) degree, the highest category of geshe degree. In 1979, he joined his teacher, Geshe Ngawang Dhargyey (dGe-bshes Ngag-dbang dar-rgyas), as the additional teacher at the Library of Tibetan Works and Archives in Dharamsala.

Throughout the 1980s and 1990s, Geshe Sonam Rinchen travelled and taught widely, from roles such as guest lecturer at Kyoto Buddhist University to teaching tours in the UK, Australia, and New Zealand. But it was at the Library of Tibetan Works and Archives that he had the largest impact. Over 34 years, Geshe Sonam Rinchen taught almost every day at the Library, usually with his translator Ruth Sonam at his side, offering the essence of the Buddha’s teachings with compassion and humor to thousands of students.

In September 2013, Geshe Sonam Rinchen passed away at the age of 80 in Dharamsala, India, after a battle with stomach cancer. Despite the suffering of the illness, he did not experience pain and did not require any drugs, and thus he passed away peacefully and with a completely clear state of mind. He was cremated on the grounds of the Library of the Tibetan Works and Archives.