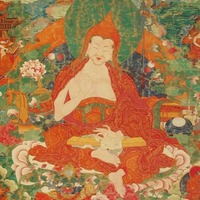 Asanga (Thogs-med, Skt. Asaṅga) was born in approximately 375 CE in Purushapura, the main city of Gandhara, present-day northern Pakistan. His brahmin mother, Prakashashila (gSal-ba’i tshul-khrims, Skt. Prakāśaśīla), in her previous life, had been a learned Buddhist pandit, devoted to Avalokiteshvara. In a debate with another pandit, she had called her opponent a woman and, because of this insult, Avalokiteshvara said she would be reborn as a woman 500 times, but that he would always care for her.

Prakashashila was extremely learned in all fields of knowledge, but, in those days, the position of women was quite weak and so she vowed to have sons who would benefit the Dharma and all beings. She consorted with a prince from the kshatriya warrior caste and gave birth to Asanga. She educated him extensively herself. Years later, after Asanga became a monk, she gave birth to Vasubandhu, having consorted with a court brahmin.

After becoming a monk, Asanga studied the sutras for five years under his abbot, Anandada, memorizing 100,000 verses each year. But when he reached the Prajnaparamita Sutras, The Sutras on Far-Reaching Discriminating Awareness, he found them so vast that he became confused. Having received an initiation from Anandada into the meditation system of Mayajala (sGyu-’phrul dra-ba) and having learned, during the ritual, of his affiliation with Maitreya, Asanga decided that only Maitreya would be able to clear away his obscuration. So, he decided to go into retreat to try and have a vision of Maitreya and receive clarification from him.

He meditated in a cave for three years but with no success. Fed up, he left the cave and quickly noticed some markings on a nearby rock that had been left by the wings of a bird as it flew in and out of its nest. Asanga thought, “If the soft wings of a bird can leave such markings on a rock, then perhaps I should persevere to meet Maitreya!” With this, he went back to his cave dwelling. According to another version of this incident, Asanga saw a man trying to rub down, with a feather, a boulder that was blocking his window.

He meditated for another three years, but still was unsuccessful, not having even a single auspicious dream. Fed up again, he left the cave and encountered someone filing down an iron rod with a silk cloth to make a needle. Asanga thought, “If someone puts so much effort into something so trivial, surely I can continue to meditate in order to have a vision of Maitreya,” and he returned to the cave.

Asanga meditated for another three years and was still unhappy with his progress. Maitreya hadn’t appeared, and so he left the cave, only to notice the holes made in the hard rock by small drops of water constantly dripping. He realized, “I must persevere if I want to see anything change!” He returned yet again to his cave.

He meditated for another three years, but there was still nothing. Truly fed up, he made a final decision to leave the cave for good. He started walking down the hill and came across a wounded dog, whose lower body was infested with maggots. Feeling intense compassion for the dog and the maggots, he wondered how he might help them. He realized that if he took the maggots off with his hands, he might crush them, and they would die. Furthermore, they needed food. So, he cut a chunk of flesh from his own leg and decided to remove the maggots gently with his tongue. Closing his eyes, he went in to start moving the maggots, only to find that the dog and the maggots had disappeared and, instead, before him stood Maitreya.

Asanga said, “I’ve been meditating for so long, and you never came to me!” Maitreya then explained to him that he had been with him all along, but karmic obscurations meant that he had been unable to perceive him. The compassion Asanga felt for the dog and maggots had purified all of the obstacles and enabled him to see Maitreya directly.

Asanga paraded around town with Maitreya on his shoulder, shouting, “Look everybody, here’s Maitreya,” but almost no one saw anything there and thought he was mad. Only one old lady, a brewer of beer, saw a dog there.

Following this, Maitreya took Asanga to Tushita Heaven to receive extensive Mahayana teachings on voidness and how to put them into practice. Asanga was there for one morning of the gods, but which, in fact, was fifty human years. When Asanga came back to earth, he wrote down from memory the teachings he had received from Maitreya in what became known as the Five Dharma Texts of Maitreya (Byams-chos sde-lnga). These are:

These texts, as well as his own following works, became the basis for the Chittamatra tenet system, also known as Yogachara and Vijnanavada:

It is said that Asanga lived to the age of 120 and, after serving as abbot of Nalanda for 12 years, passed away in Rajagriha.