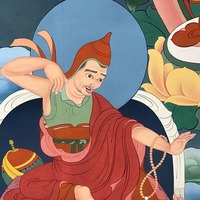 Dignaga (Phyogs-kyi glang-pa, Skt. Dignāga) was born around 480 CE to a brahmin family in Simhavakta, in southern India. Initially, he became a monk of the Vatsiputriya (gNas-ma bu, Skt. Vātsīputrīya) school and studied under the teacher Nagadatta. This Hinayana subsect asserted the existence of an inexpressible self (brjod-du med-pa’i bdag) that cannot be said to be either the same or different from the five aggregates, or either static or nonstatic. When Nagadatta instructed him to search for such a self within his body, Dignaga sat naked in his room throughout the day, surrounded by lamps. When his teacher found out and Dignaga explained to him that he was searching for the self but could not find anything, Nagadatta took this as an indirect criticism and mocking of the Vatsiputriya doctrine and asked him to leave.

Dignaga then went to study at Nalanda with the great Buddhist scholar, Vasubandhu (dByigs-gnyen, Skt. Vasubandhu). Vasubandhu instructed him in the Vaibhashika, Sautrantika and Chittamatra (Mind Only) teachings. Above all, Dignaga especially mastered logic and epistemology. Eventually, he became known as one of Vasubandhu’s four great disciples and came to be included as one of the “Six Ornaments of the Southern Continent” (’Dzam-gling rgyan-drug) – Nagarjuna, Aryadeva, Asanga, Vasubandhu, Dignaga and Dharmakirti – that is, the six great commentators on the Buddha’s teachings. He excelled particularly in debate, and is known for his victory over the brahmin, Sudurjaya, in a debate held at Nalanda monastery.

Dignaga authored many important texts, including:

Of these works, his Compendium of Validly Cognizing Minds, written from the point of view of the Sautrantika tenet system, became the foundational text for Buddhist logic and epistemology. He wrote this text while living in a cave. At one point when he had left his cave for alms, he found, upon returning, that someone had erased everything he’d written. He had to start writing his text all over again. This happened a second time, but he didn’t get discouraged and wrote the text yet again. He added a note, saying that it is wrong to erase this just for fun, but if you want to debate its points, come face me in person.

Sure enough, the non-Buddhist brahmin Kṛṣṇa showed up to confront Dignaga. They debated and Dignaga repeatedly defeated him over each of the main points. He told him that he must now accept the Buddhist position. Kṛṣṇa became so incensed that he used his special powers to burn all of Dignaga’s belongings. Exacerbated that he could not help even this one person, let alone all beings, Dignaga threw his writing slate up in the air and declared that, if it fell to the ground, he would give up bodhichitta. But Manjushri suddenly appeared and caught hold of the slate. He admonished Dignaga never to give up bodhichitta and prophesized that his text would be of enormous benefit to beings in the future. In this way, Dignaga finally finished his composition, which had a profound impact on future Buddhist thought by formulating Buddhist logic into a complete and systematic science.

Another text on logic, Engaging in Logic (Skt. Nyāyapraveśa), translated into Tibetan from Chinese as Engaging in Logic: A Treatise on Valid Cognizing (Tshad-ma’i bstan-bcos rigs-pa-la ’jug-pa) is ascribed to Dignaga, but was actually composed by the seventh-century non-Buddhist Nyaya logician, Shankarasvamin (Skt. Śaṅkarasvāmin).

Dignaga passed away in approximately 540 CE.