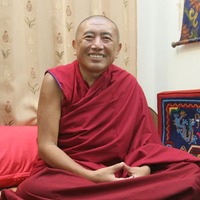 Geshe Namgyal Wangchen (dGe-bshes rNam-rgyal dbang-chen) was born as Thubten Gyaltsen (Thub-bstan rgyal-mtshan) in 1934 in Lhasa, Tibet, and is regarded as a great scholar and one of the key early teachers to bring Tibetan Buddhism to the West.

At the age of ten, he entered Drepung Monastery (Bras-spungs dGon-pa), where he rigorously studied the major texts under the supervision of the abbot, Khenpo Pema Gyaltsen Rinpoche (Mkhan-po Pad-ma rGyal-mtshan Rin-po-che). Namgyal Wangchen turned out to be an excellent student and practitioner, and he mastered many complex texts within a very short period of time. When he was 25, China invaded Tibet and, although he initially wished to stay in his homeland, he soon realized that in order to continue his studies, he would need to go into exile, and so he fled to India. At first, he studied at Buxa Duar, enduring very harsh living conditions, and eventually he settled at the re-established Drepung Monastery in South India, to continue under the direction of Khenpo Pema Gyaltsen, who had also escaped to India.

His flair as a teacher came to the attention of His Holiness the Fourteenth Dalai Lama and Lama Thubten Yeshe (Bla-ma Thub-bstan ye-shes), and with their approval, he was appointed the resident teacher of Manjushri Centre in London, now known as Jamyang Buddhist Centre. He arrived there in 1982 with the intention of staying for just two years, but he found the students were so interested and committed to practicing what he taught, that he ended up staying for a total of ten years.

In 1992, Geshe Namgyal Wangchen returned to India to teach at Drepung Monastery. He taught six to eight classes a day, for six days a week, with tireless dedication to his students and the 2,500 monks of Drepung. During his time at Drepung, at the request of His Holiness the Dalai Lama, Geshe Namgyal Wangchen served as the tutor of Ling Choktrul Rinpoche (Gling mchog-sprul Rin-po-che), the reincarnation of His Holiness’s Senior Tutor, Yongdzin Ling Rinpoche (Yongs-‘dzin Gling Rin-po-che), and composed many texts, suitable for both Tibetan monastics and Western lay practitioners. He continued teaching until he passed away in 2015 at the age of 81.