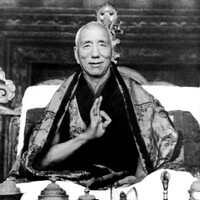 Jamyang Khyentse Chokyi Lodro (’Jam-dbyangs mKhyen-brtse Chos-kyi blo-gros), also known as Dzongsar Khyentse Chokyi Lodro (rDzong-gsar mKhyen-brtse Chos-kyi bLo-gros), was born in 1893 in the Kham region of eastern Tibet. At the age of seven, he was brought to Kathok Monastery (Kah-thog dGon), where he was recognized as an emanation of Jamyang Khyentse Wangpo (’Jam-dbyangs mkhyen-brtse’i dbang-po), a great master of the previous century, and enthroned at the monastery.

At Kathok, Chokyi Lodro took the novice vows of a monk, and started his studies in Buddhist philosophy, as well as grammar, astrology, and Sanskrit. By the time he was seventeen, he had received numerous teachings and transmissions from the Sakya (Sa-skya) and Nyingma (rNying-ma) schools and was already teaching Buddhist philosophy to students. In 1919, at Dzogchen Monastery (rDzogs-chen dGon), he received full ordination as a monk and spent the following years visiting various monasteries of the four main schools, receiving teachings from numerous teachers. After this, he took over administration of Kathok Monastery for fifteen years, spending his time composing and perfecting his practice of texts from all the schools. Due to his accomplishments of so many teachings from all the traditions, Chokyi Lodro is regarded as a Rimé (Ris-med), or non-sectarian master, and one of the most influential and eminent teachers of the last century. Many of the teachers who brought Buddhism to the West, including illustrious figures such as Dilgo Khyentse Rinpoche (Dil-mgo mKhyen-brtse Rin-po-che), viewed him as their teacher.

In 1949, at the age of 56, Chokyi Lodro became seriously ill. According to prophecies from various teachers, it was said that in order to remove obstacles to his life, he would need to disrobe and take a spiritual consort. He married Khandro Tsering Chodron (mKha’-’gro Tshe-ring chod-sgron) that year, and his health recovered almost immediately. Later on, as the political situation in Tibet deteriorated, he travelled to Lhasa and then went on pilgrimage to India, and after that, sought refuge from the troubles in Tibet, making his home in Sikkim. During the last few years of his life, he continued to give teachings and initiations. He passed away in 1959 at the age of 66, with his cremation taking place in Sikkim, where a golden stupa with his remains is kept at the Royal Chapel.