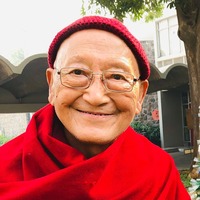 Venerable Doboom Lozang Tenzin Tulku (rDo-bum Blo-bzang bstan-’dzin sPrul-ku), also known simply as Doboom Tulku, was born in 1942 in Shayul (Sha-yul) in Kham (Khams), eastern Tibet. At the age of two or three, he was recognized by Lama Phurchog Jamgon Rinpoche (Bla-ma Phur-lcog ’Jam-mgon Rin-po-che) to be the reincarnation of the previous Doboom Tulku. Following this, he was taken to stay at a hermitage near Dargye Monastery (Dar-rgyas dGon), where he stayed until the age of twelve.

In 1953, Doboom Tulku entered Drepung Monastery (Bras-spungs dGon-pa) in Tibet, where he studied Buddhist philosophy until the Chinese invasion of Tibet in 1959 forced him into exile in India at the age of seventeen. For the following decade, Doboom Tulku resided at the lama camp at Buxa Duar, in West Bengal, enduring harsh conditions until he joined the Institute of Higher Tibetan Studies at Sarnath in 1969. Continuing with his studies in Sarnath, he obtained a Geshe Acharya degree in 1972.

After obtaining his degree, he worked as a librarian at Tibet House in New Delhi, until he joined the Library of Tibetan Works and Archives in Dharamsala as a librarian and research assistant in 1973. By 1981, having gained more experience, he returned to Tibet House New Delhi to serve as Director, with the mission of promoting Tibetan cultural heritage through Tibet House’s diverse range of programs. Doboom Tulku served as Director of Tibet House for 30 years.

Doboom Tulku has also worked with His Holiness the Dalai Lama’s Private Office and has accompanied His Holiness the Dalai Lama on multiple visits abroad, from trips to the USA, USSR, Japan, and Mongolia. He has published widely, on topics ranging from Tibetan medicine to Buddhist meditation and the Chittamatra Mind-Only School of philosophy. He also has a personal interest in the effects of music for spiritual practice and worked hard at setting up the World Festival of Sacred Music, which became a global event. These days, Doboom Tulku spends most of his time in New Delhi working on interreligious and Tibetan cultural projects.