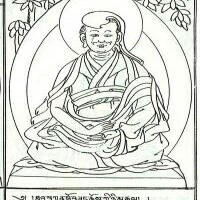 At Gonlung, he started his monastic training, studying and memorizing important texts and learning about logic. In 1750, he invited Changkya Rolpai Dorje, who had returned to Amdo from Beijing, to visit him at Gonlung. On this visit, Changkya Rolpai Dorje bestowed upon Lozang Chokyi Nyima the novice vows of a monk. Soon after this, at the early age of fourteen, he started to give teachings. Then, at the age of eighteen, he received full monastic ordination from Sumpa Kenpo Yeshe Paljor (Sum-pa mKhan-po Ye-shes dpal-’byor), one of his primary teachers.

Almost straight after receiving full ordination, he journeyed to Lhasa, receiving a very warm welcome from government ministers and spiritual teachers. He started studying in Drepung Monastery (’Bras-spungs), and met many great teachers, such as the Seventh Dalai Lama himself, as well as the Sixth Panchen Lama, Lozang Palden Yeshe (Blo-bzang dpal-ldan ye-shes) and the Thirty-second Sakya Trichen, Ngawang Kungpa Lodro (Ngag-dbang kun-dga’ blo-gros). He also met again with Changkya Rolpai Dorje. After receiving many teachings and empowerments from these and other teachers, Lozang Chokyi Nyima decided to return to Amdo at the age of 25.

Two years after his return to Amdo, he was invited to visit Beijing by the Qianlong Emperor, at the height of the flourishing of Tibetan Buddhism at the Manchu Qing court. He accepted the invitation and spent the next five years travelling between Beijing and Mongolia, offering teachings and usually gaining many followers and great gifts in return. He returned to Amdo in 1768 and spent several years working on numerous texts, the most well-known of which is A Crystal Mirror of Tenet Systems (Grub-mtha’ shel-gyi me-long), a monumental presentation of the assertions of the Buddhist and non-Buddhist philosophical systems of India, Tibet and China.

The Qianlong Emperor soon again requested the presence of Lozang Chokyi Nyima, meaning that he had to return to Beijing. Over the following two decades, he would continually visit Beijing as well as Mongolia, giving teachings and organizing other Dharma activities. He passed away at the age of 66, in 1802.