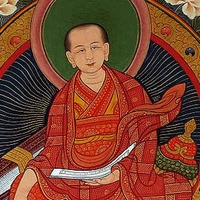 Geshe Chekawa Yeshe Dorje (’Chad-kha-ba Ye-shes rdo-rje) was born into a Nyingma family in a place called Luro (Lu-ro) in 1101. From an early age, he exhibited a natural joy in developing compassion and wishing to take upon himself the suffering of others. He became a student of Rechungpa (Ras-chung-pa) and then, at the age of 21, took the vows of a novice monk, whereupon he was given the name Yeshe Dorje. Two years later, inspired by all the teachings he had heard, he took full ordination.

At the age of 26, he received from Geshe Nyangchag Zhingpa (dGe-bshes Myang-lcags zhing-pa) a teaching on the Eight Verses of Mind Training (Blo-sbyong tshigs-brgyad-ma) by Geshe Langri Tangpa (dGe-bshes Glang-ri thang-pa), which instilled within him a great sense of inspiration and devotion to Langri Tangpa, a disciple of Geshe Potowa (dGe-bshes Po-to-ba Rin-chen gsal). Thus, he immediately set out for Lhasa in search of this great teacher, only to arrive and find out that Langri Tangpa had already passed away. He was sent instead to Geshe Potowa’s other main disciple, Geshe Sharawa (dGe-bshes Sha-ra-ba Yon-tan grags), who gave him extensive teachings, but initially did not transmit any mind-training instructions.

Geshe Chekawa stayed with Sharawa until he received all the instructions required and had mastered all the mind-training teachings. It is said that his training forced him to endure a lot of hardships and abuse, but his perseverance was so strong and steadfast that he soon realized bodhichitta and completely eradicated all self-cherishing. In this way, Geshe Chekawa became a highly-renowned teacher of the Kadampa (bKa’-gdams-pa) tradition.

In 12th-century Tibet, leprosy was a common and incurable ailment. When Geshe Chekawa encountered lepers, he would impart teachings on tonglen (gtong-len), also known as giving and taking, and found that many of them were able to cure themselves of leprosy through their practice. He then decided to no longer keep these precious teachings secret, and composed the text, Seven Point Mind Training (Blo-sbyong don-bdun-ma), which has become an essential mind-training text even for practitioners today.

When his teacher, Geshe Sharawa, passed away in 1141, Geshe Chekawa took over many of his responsibilities. He also founded his own monastery, Cheka (’Chad-kha dGon), not far from Lhasa, which housed almost one thousand monks. He taught there and at other monasteries until his death at the age of 75 in 1175.