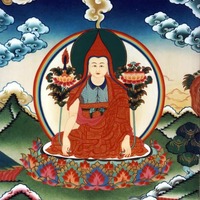 Longchen Rabjampa Drime Ozer (Klong-chen Rab-’byams-pa Dri-med ’od-zer), also known as Longchenpa (Klong-chen-pa), was born in 1308 in a village called Todrong (sTod-grong) located in Central Tibet and is regarded as one of Tibetan history’s most peerless Buddhist teachers and practitioners.

He was highly skilled and evidently highly intelligent from a young age, and his family practiced the Nyingma lineage, with his father – himself an accomplished spiritual practitioner – descending from direct students of Padmasambhava, and his mother hailing from the illustrious Drom (’Brom) clan, with ancestors such as Dromtonpa (’Brom-ston-pa), one of Atisha’s main disciples. Longchenpa received many teachings and initiations from his father, and by the age of ten, was well-versed in many complicated texts, such as the Prajnaparamita in Twenty Thousand Verses and the Prajnaparamita in Eight Thousand Verses.

At the age of twelve, Longchenpa left home to receive the novice monk ordination at Samye Monastery (bSam-yas dGon). His intellect was so sharp that he studied and wrote a commentary on the Vinaya (monastic rules of discipline), which was so well-received that by the age of fourteen, he is said to have actually started teaching the Vinaya to others.

In 1327, at the age of nineteen, Longchenpa moved to Sangpu Neutog (gSang-phu Ne’u-thog), where he furthered his studies with the teachings of the Sakya and Kadam traditions. Over the next decade, Longchenpa studied various sutra and tantra teachings from over twenty masters, including the Third Karmapa (Kar-ma-pa Rang-’byung rdo-rje). Longchenpa was not only a great scholar, but an accomplished meditator. During retreats, he had visions of deities, including Manjushri and Sarasvati, as well as of Padmasambhava and Yeshe Tsogyal (Ye-shes mtsho-rgyal).

In his late twenties, Longchenpa met the dzogchen master Rigdzin Kumaradza (Rig-’dzin Ku-ma-ra-dza or Ku-ma-ra-ra-dza). This master took Longchenpa as his student and bestowed upon him the complete dzogchen teachings, especially those found in The Heart Essence Teachings of Vimalamitra (Bi-ma sNying-thig) and The Heart Essence Teachings of the Dakinis (mKha’-gro snying-thig). Longchenpa combined them with his own commentary, The Profound Further Essence (Zab-mo yang-thig), in his Four Branches of the Heart Essence Teachings (sNying-thig ya-bzhi). Among the many other texts he authored, The Seven Treasures (mDzod-bdun) are the among the most well-known. Further, he collected and organized all the dzogchen texts available at his time. The Southern Treasure Text Lineage (lHo-gter) traces from him.

In 1359, among political instability in Tibet, Longchenpa found himself exiled to Bhutan. In Bhutan, he travelled widely giving teachings and establishing small hermitages. Six years later, Longchenpa was allowed to return to Tibet, even giving teachings to the person who exiled him in the first place, Tai Situ Jangchub Gyaltsen (Tai Si-tu Byang-chub rgyal-mtshan). He passed away in 1364, at the age of 56.