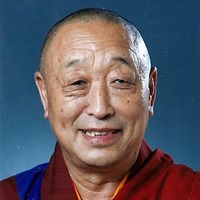 Lama Tar started to learn reading and writing, along with the chanting and performing of rituals, as a young boy. At the age of seven, he went to Kyangstang Monastery (sKyang-tshang dGon) to further his knowledge with his first teacher, Chatsang Sungtar (Bya-tshang Srungs-thar). In 1941, when Lama Tar was thirteen, his mother passed away and he became inspired to learn more about Tibetan medicine, studying with Tenpa Lhundrub (bsTan-pa Lhun-grub). At the age of seventeen, he took the vows of a novice monk and was given the name Sherab Namdag (Shes-rab rNam-dag). He continued studying the teachings of the Bon tradition at Kyangtsang Monastery until he obtained his geshe degree at the age of 25.

Upon completion of his studies, his master, Tenzin Lodro Gyatso (bsTan-dzin blo-dro rgya-mtsho) sent him on a perilous mission to the kingdom of Trokyab (Khro-skyabs), to print the entire Bon Canon that was held at the palace of the king. Sherab Namdag successfully completed the task, travelling the long and difficult journey to and from Trokyab by foot.

After leaving Tibet in 1959 due to the uprising against the Chinese invasion, he journeyed to India via Nepal, managing to visit many monasteries on the way to receive teachings and initiations from Bonpo lamas. He even managed to borrow rare Bonpo manuscripts that he later reprinted in Delhi and distributed to libraries and Tibetan cultural centers across the world.

After teaching in the UK and Norway for several years, he returned to India at the age of 40, as he’d been selected as the Menri Trizin (sMan-ri Khri-’dzin), the throne-holder of Menri Monastery, becoming the supreme head of all Bonpo followers. He now became known as the Menri Trizin Lungtok Tenpai Nyima. Menri Monastery (sMan-ri dGon) in Tibet had been completely destroyed during the Cultural Revolution, and so in 1970, Lungtok Tenpai Nyima built a new Menri Monastery in Dolanji, northern India. During his time as Menri Trizin, he engaged actively in the preservation and propagation of the Bon teachings and worked tirelessly on projects aimed at benefiting the lives of Tibetans and Indians living near the monastery.

In 2017, after experiencing a year of physical sickness, and three days before his actual death, he invited the local children to visit him, whereupon he gifted them with candy. On the next day, he gave blessings to all the village people and bid them farewell. On the morning of the 14th September, he gave a final audience to all of the monks, and that evening, passed away peacefully at the age of 89.