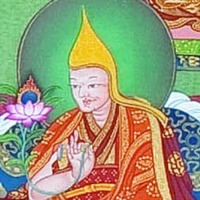 The First Dalai Lama, Gendun Drub (dGe-‘dun grub) was born as Pema Dorje (Padma rdo-rje) in 1391 to a nomadic family that wandered the areas around Sakya (Sa-skya), in the Tsang (gTsang) district of Tibet. His mother, Jomo Namkha Kyi (Jo-mo nam-mkha’ skyid), gave birth in a farmhouse, and a legend goes that, that very night, the family was attacked by bandits. Jomo Namkha Kyi quickly wrapped the baby in blankets, hid him among the rocks, and then fled. She returned the next morning to find her son doing just fine, with a black raven beside him. It is said that this raven was an emanation of Mahakala, who would later be the First Dalai Lama’s personal protector deity.

When his father passed away, Gendrun Drub was sent to Narthang Monastery (sNar-thang dgon), where he commenced learning to read and write and then took the novice vows of a monk at the age of fifteen from the abbot, Drubpa Sherab (Grub-pa shes-rab), where he was given the monastic name Gendun Drubpa Pal (dGe-‘dun grub-pa dpal). He excelled particularly in his studies of logic and vinaya – the vows and rules of ethical discipline for the monastic community – and, at the age of twenty, became fully ordained.

After this, Gendun Drub travelled eastwards to U (dBus), in order to study under the great master Tsongkhapa (Tsong-kha-pa). Although Tsongkhapa passed away a mere four years after their first meeting, Gendun Drub was regarded as one of his principal disciples. Tsongkhapa gave Gendun Drub a new set of robes as an auspicious sign that he would help to spread the Buddhadharma across Tibet.

After Tsongkhapa’s passing in 1419, Gendun Drub studied with Gyu Sherab Sengge (rGyud Shes-rab seng-ge), who held all of Tsongkhapa’s tantra teachings. For over a decade, they travelled together to teach at various Kadampa (bKa’-gdams-pa) and Sakya monasteries, helping to spread and popularize Tsongkhapa’s lamrim (lam-rim) teachings on the graded path. Later, in 1433, Gyu Sherab Sengge went on to found Gyume Monastery (rGyud-smad Grva-tshang), the Tantric College of Lower Central Tibet

In 1447, at the age of 56, Gendun Drub founded Tashilhunpo Monastery (bKra-shis lhun-po) in Shigatse (gZhis-ka-rtse), which would become of the largest monastic universities of the Gelug (dGe-lugs) tradition. Just as Tsongkhapa had done in Lhasa, Gendun Drub inititated a Great Prayer Festival at Tashilhunpo, which was held twice during his lifetime. He taught and remained the abbot of Tashulhunpo until 1474, when he passed away during meditation at the age of 84.

Among Gendun Drub’s many works, the most well-known is Annotated Commentary to (Vasubandhu’s) “Treasure House (of Special Topics of Knowledge)”: Clarifying the Path to Liberation (mDzod-tik thar-lam gsal-byed).

Gendun Drub was posthumously bestowed the title of Dalai Lama more than 100 years after his death, when the third reincarnation of the lineage, Sonam Gyatso (bSod-nams rgya-mtsho), was given the name by Mongol tribal leader Altan Khan in 1578.