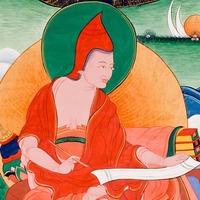 Vasubandhu was born in the late 4th-century in Purushapura in the land of Gandhara, present-day northern Pakistan. His year of birth is given as the year after his older half-brother, Asanga, became a monk. His mother was the same as Asanga’s, that is, the extremely learned Prakashashila (gSal-ba’i tshul-khrims, Skt. Prakāśaśīla), and his father was a brahmin, a court priest who was an authority on the Vedas.

Having been taught the basic fields of knowledge by his mother, she told him to master all the texts of the Tripitaka, The Three Baskets of the Buddha’s words. Following her advice, he received monk ordination at Nalanda and first studied the basic Hinayana texts. He then went to Kashmir to study the Vaibhashika teachings, especially those on abhidharma (special topics of knowledge), as well as on vinaya (the monastic rules of discipline) with Sanghabhadra (’Dus-bzang, Skt. Saṅghabhadra). On his way back to central India, he was attacked by robbers, who stole all his texts. Undaunted, he returned to Kashmir to collect more texts and, once again, they were stolen on the road back to India. This happened three times. He decided that if he memorized all the texts, then no one could steal them. He succeeded in his monumental feat of memorization and returned, unharmed and with no possessions, to Nalanda, where he taught widely.

There, he composed his Treasure House of Special Topics of Knowledge, Put in Verses (Chos mngon-pa’i mdzod-kyi tshig-le’ur byas-pa, Skt. Abhidharmakośa-kārikā), explaining the Vaibhashika view of abhidharma, and sent it to his teacher, Sanghabhadra, who was very pleased. He then wrote his Autocommentary to “A Treasure House of Special Topics of Knowledge” (Chos mngon-pa’i mdzod-kyi bshad-pa, Skt. Abhidharmakośa-bhāṣyā), criticizing many of the Vaibhashika assertions from the Sautrantika point of view. This did not please Sanghabhadra at all and he wrote rebuttals of his student’s Sautrantika assertions in his Extensive (Auto)commentary to “A Lamp for Topics of Knowledge,” A Subcommentary of Light (Abhidharmadīpa-vibhāṣāprabhāvṛtti).

While at Nalanda, Vasubandhu read the five Mahayana texts his half-brother Asanga had written down from his teachings from Maitreya and, disparaging the Mahayana teachings, questioned that he had actually received them from Maitreya. He said, sarcastically, that Asanga had stayed 12 years in the jungle and, instead of actualizing samadhi, he wrote an elephant-load of works. Concerned that Vasubandhu might use his great intellect to undermine the Mahayana teachings, Asanga commissioned one of his disciples to memorize The Sutra of the Ten Bodhisattva Levels of Mind (Sa bcu-pa’i mdo, Skt. Daśabhūmika Sūtra) and another to memorize The Sutra Taught by the Arya Akshayamati (Blo-gros mi-zad-pas bstan-pa’i mdo, Skt. Āryākṣayamati-nirdeśa Sūtra) and to recite these Mahayana sutras outside where Vasubandhu was staying.

After hearing the first of these at night and the other the next morning, and realizing how profound the Mahayana teachings were, Vasubandhu felt deep regret at having disparaged them. He asked his attendant to bring a knife so that he could cut out his tongue, but Asanga’s two disciples told him this would do nothing to purify the negative potentials he had built up and best to discuss the matter with Asanga. The two half-brothers met and had a debate, as the result of which Vasubandhu accepted the Mahayana teachings and the Chittamatra view that Asanga espoused. Asanga then taught him the Mahayana sutras and told him that he should teach them extensively himself, so as to purify the aspersions he had cast toward its teachings.

Vasubandhu memorized the entire corpus of Mahayana sutras and took as his daily practice reciting the 8,000 Verse Prajnaparamita Sutra. Normally, it would take someone a whole year to recite all the Mahayana sutras, but Vasubandhu was able to do that – and all from memory – uninterruptedly for fifteen days and nights while sitting in a tub of sesame oil to prevent a disturbance to his subtle energy-system. Such extraordinary feats in conferring the oral transmission of the Buddha’s words earned him the title “The Second Omniscient One” (kun-mkhyen gnyis-pa).

Vasubandhu wrote a very large number of texts. Among them, were commentaries on several Mahayana sutras and several of Maitreya and Asanga’s Chittamatra texts, such as:

He also wrote several Chittamatra texts of his own, including:

During the latter part of his life, he engaged in contemplative meditation and declined to engage in debate with even worthy opponents. He passed away at the age of 80 while on a visit in what is currently Nepal.