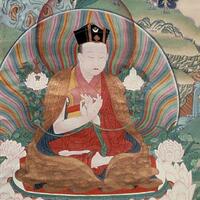 The Third Karmapa, Rangjung Dorje (Rang-’byung rDo-rje), was born in 1284 in the southern Tibetan area of Dingri Langkor (Ding-ri glang-’khor) to a Nyingma (rNying-ma) family residing close to Mt. Everest. At the age of three, he left those present astounded when he sat up and proclaimed that he was the rebirth of the previous Karmapa. Several years later, he made himself a black hat and restated the fact that he was, indeed, the Karmapa.

At the age of five, the young boy was recognized officially as the rebirth of the Second Karmapa, Karma Pakshi (Karma Pakshi) by Orgyenpa Rinchen Pal (O-rgyan-pa Rin-chen dpal), who then proceeded to transmit all of the Kagyu teachings to him. Two years later, Rangjung Dorje took novice ordination with Kunden Sherab (Kun-ldan Shes-rab), and then moved to Tsurphu (mTshur-phu), the seat of the previous two Karmapas. In 1301, at the age of eighteen, he took full ordination.

At Tsurphu, Rangjung Dorje received teachings from the Kagyu and Nyingma traditions for more than a decade. He received the complete dzogchen teachings from Rigdzin Kamaradza (Rig-’dzin Ka-ma-ra-dza or Ka-ma-ra-ra-dza), who decades later also transmitted them to the Nyingma master Longchenpa. The Karma Kagyu tradition of dzogchen is traced from Rangjung Dorje’s Karmapa Heart Essence Teachings (Kar-ma snying-thig).

Later on, Rangjung dorje also sought out teachers from the Kadampa and Sakya traditions. It is said that he held all the Buddhist teachings that had been brought from India to Tibet. He also composed widely on various topics including tantra, producing works such as the renowned Prayer of the Definitive Meaning Mahamudra (Nges-don phyag-rgya chen-po’i smon-lam; The Mahamudra Prayer) and The Meaning of the Profound “Internal (Kalachakra” Chapter of “Stainless Light”) (rNal-’byor bla-na med-pa’i rgyud-sde rgya-mtsho’i snying-po bsdus-pa zab-mo nang-gi don; The Profound Inner Meaning). His writings on the astronomical and calendar calculations found in the “External World” chapter of Stainless Light are the source of the Tshur-bu system (Tshur-lugs) of Tibetan astro sciences.

Rangjung Dorje travelled widely across Tibet – often establishing monasteries or retreat centers on his way – and even visited China on two occasions. In 1331, he received an invitation from the Yuan Emperor Tugh Temür (Emperor Wenzong) to visit Dadu, the capital of the Mongol-ruled Yuan Empire, but Tugh Temür passed away before Rangjung Dorje arrived. The next emperor, Rinchinbal (Emperor Ningzong), also died while the Karmapa was in Dadu, and so he was present when Toghon Temür (Emperor Huizong), the last Yuan emperor, was enthroned. Rangjung Dorje gave the new emperor Buddhist teachings, securing the importance of the Karma Kagyu tradition within the Yuan Mongol court at Dadu, present-day Beijing.

Rangjung Dorje returned to Tibet in 1334, after promising the emperor to return to China within two years. Thus, he was forced to return to China after spending a winter at Samye Monastery (bSam-yas dGon), arriving in Dadu in 1337. Rangjung Dorje passed away two years later in 1339 in Dadu at the age of 55, when it is said that his face appeared clearly in the moon for all to see.